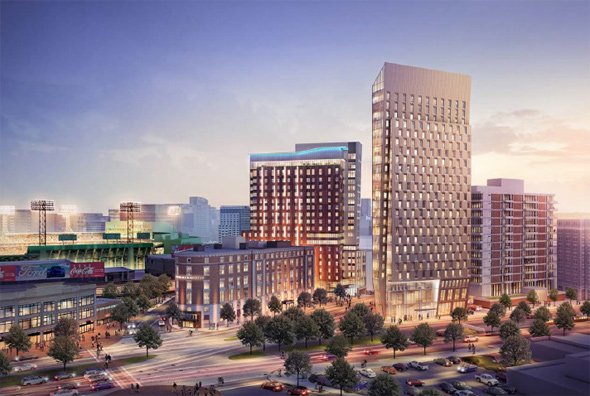 Mark Development of Wellesley and Buckminster Annex LLC have filed plans with the BPDA to add two new hotel towers next to and across the street from the Buckminster Hotel in Kenmore Square.

The two new buildings - 24 stories on Commonwealth Avenue, replacing a one-story bank building and 19 on Beacon Street, replacing three existing buildings - would add a total of 677 hotel rooms to the Buckminster's existing 132. The developers are also proposing a 145-space underground parking garage beneath the Beacon Street tower. The two new towers would also have ground-floor retail space.

The wedge-shaped Comm. Ave tower on a 6,000-square-foot lot, would be a "micro hotel" with 382 very small rooms, with "rooftop amenity space which will be open to the public." The existing Citizens Bank will get some of the ground-floor retail space.

The Beacon Street hotel would be a more conventional hotel, with 295 rooms in which guests could turn around with their arms spread out as well as conference rooms, a cafe and lounge and more "rooftop amenity space open to the public." It would also include a new pedestrian connection between Brookline Avenue and Beacon Street.

The Buckminster would remain largely as it is, the developers say.

Because the total lot size of the project is slightly more than an acre, the developers will file a request for "planned development area" designation, which would let them ignore existing zoning for the current parcels and bargain directly with the BPDA over the size and look of the buildings, rather than also having to go before the Board of Appeals. Because the project is larger than 50,000 square feet, the BPDA will appoint a citizens' advisory group to consider the plans. 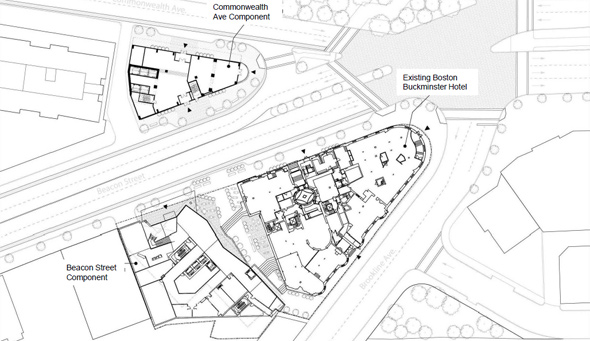 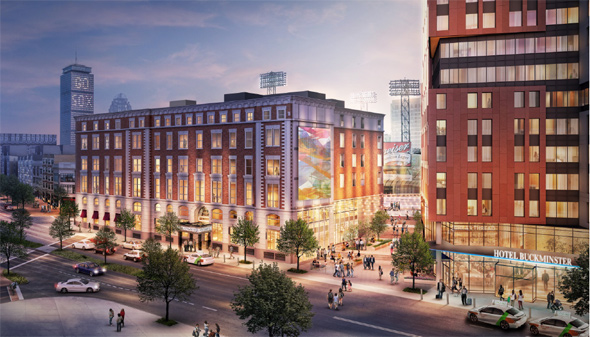 In their filing, the developers discuss what they think the changes will mean to Kenmore Square:

Over the last 20 years, the Kenmore Square neighborhood has experienced slow progress towards the transformation and revitalization seen in many other areas of central Boston. Both the construction of the Hotel Commonwealth and the bus station replacement and its associated pedestrian improvements have had a positive impact on the public realm, specifically the south side of the Square; however, the remainder of the Square remains largely unchanged. The Kenmore Square Hotels Project will continue the Square's transformation, and vastly improve a neighborhood that today features dated retail uses, empty office floors, and an inactive pedestrian realm largely predicated on foot traffic from Fenway Park. A recent change in ownership on the north side of the Square presents further opportunity for redevelopment of existing assets and additional density that will complement the proposed Project. ...

The Project will create a new destination in Kenmore Square by adding new activity at the intersection of three major streets, where there is currently little reason for people to do more than just pass through. From Brookline Avenue to Deerfield Street, new opportunities for retail, an improved pedestrian experience, and a more dynamic public realm will reinvigorate this portion of Kenmore Square. The Project will develop the currently underutilized parcels and improve the streetscape with landscaped sidewalks, street furniture and comfortable and inviting open spaces. As previously described, a new, accessible connector between Brookline Avenue and Beacon Street is also proposed as part of the Project, which will allow the 24/7 flow of pedestrians from Brookline Avenue to Beacon Street and beyond, and will improve the pedestrian experience for those traveling between the Fenway neighborhood, Kenmore Square, Boston University, and the Charles River.

That Citizens, Or Citizins for you fans of The Departed, has always been a stubbed toe building at what should be a grand intersection.

Mark Development is the same group that is trying to build that big development in Newtonville that will see the Orr building and a number of others come down. They also used to build a lot of drugstores through New England. The developer used to name all their ownership entities after mostly National League All Stars from the 60's as in Brock Montpelier LLC or Koufax Dover LLC (I made those entities up, but you get the idea).

As far as the Micro hotel room size goes, you are in the city, what are you going to do, sit around and read Death In Venice on the Veranda? No, you go out and play.

This is a good thing for the city.

what are you going to do, sit

what are you going to do, sit around and read Death In Venice on the Veranda?

My favorite part of this is

My favorite part of this is the rendering showing people jaywalking across Beacon St to get to their new retail plaza. At least they are showing reality rather than some fantasy :) They also include the street as part of their parcel to meet the 1+ acre minimum for a PDA designation.

They also include the street as part of their parcel to meet the 1+ acre minimum for a PDA designation.

Except they don't. On page 25, they write: "The total area of the Commonwealth Avenue Site and
Beacon Street Site (excluding public ways) is approximately 46,441 sf,"

Excluding public ways. Project Area vs Planned Development Area per the legend. That 46k+ sf does not include the street.

I've always been curious to

I've always been curious to know what it would be like to stay overnight in a cheese grater...

A Hotel in 3 Pieces

Rather strange to have a hotel that will exist as 3 separate buildings, but I guess that's only a problem to their guests.

I also wonder about the branding, since, IMHO, the Hotel Buckminster is currently associated with being a rundown flophouse.

Petty quibbling aside, I like how it looks and say, "Build it!"

One upshot of more hotel rooms is that it puts downward pressure on nightly rates -- including on AirBnB. That might free up a few units from perpetual AirBnB back to the proper housing market.

Looks great! However, will it

Looks great! However, will it cast a shadow on the Citgo sign? We need committees.

rather they were apt/condos instead, but I get the draw of another hotel near Fenway Park and BU.

I do feel bad

for the people who have the Kenmore facing balconies on the building behind the Citizens but they had a good run of what I assume is one of the best views in the city.

Fond memories from one of those balconies:
- Marathon day party with lots of drink and females.
- Watching a cop tackle a guy riding his bike down the marathon route when he shouldn't have been riding there.

The views from those apartments are incredible, looks right up the avenue. That’s being said, the building is a little run-down looking and that citizens needs a makeover,. The interior is very run down and very 70s looking.

Having worked at The Buckminster, i can affirm the notion that it is a rundown flop house. However, it’s proximity to BU and other colleges as well as Fenway is a huge seller and they’ll charge upwards of $500 on a game night. The Slomiak group behind them has had something in the works for years and I’m happy to see this was the result. For a long time they were talking about trying to add floors to the existing building like the Commonwealth did a few years ago.

Another note- sweet deal on another bridge over the pike! I work at Cask n Flagon now and this is a sure fire way to drag even more in. Woot.