Perfect day to watch a parade in Roslindale 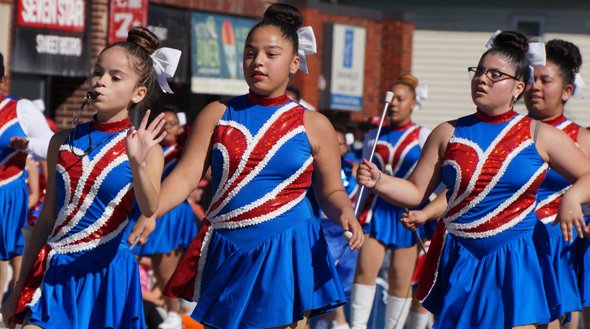 This year marked a first for the venerable neighborhood parade - its official "mayor" had four legs - Rozzie the Dog, to be exact.

That entitled Rozzie to a ride on a float, probably a good thing for somebody in a fur coat, because while the sunny skies were good for people lining the streets, it might not have been the best for people wearing costumes as they marched into West Roxbury from Roslindale Square and then back again. Members of the Boston Latin School equivalent, the Junior Classical League, wore T-shirts, except for the one kid who got to ride in a chariot: It was nice of the T to lend one of the new Orange Line cars for the parade: There were, of course, plenty of bands and dancing groups, including the English High marching band: New to the parade this year was the West Roxbury Chinese Culture Society: McGruff couldn't quite figure out how to march with the Longwood Security honor guard: Roslindale Is for Everyone let a person in a dog outfit tell its story: As you'd expect, several politicians made the parade, including Mayor Walsh, here talking to Boston EMS Chief James Hooley and a young child: Tito Jackson worked the sidewalks and found some fans: Local elementary schools were well represented, including the Philbrick: A contingent of women in pussy hats urged people to help them neuter and care for Boston's feral cats: It wouldn't be a parade in New England without at least one group of people in colonial garb firing muskets: And it wouldn't be a parade in Roslindale without the Rozziemobile: I thought we were getting a military flyover, but turns out it was just the normal airplane sounds.

Yes, the men and women of

Yes, the men and women of Boston's Forgotten Felines (BFF) enjoyed our first time walking the parade and do hope folks appreciate our lighthearted attire to reflect our adoration of all things cats. BFF is a nonprofit volunteer based recognized rescue that cares for Boston's feral population and provides rescue and fostering for abandoned cats in Boston. We also provide education around what to do if one is no longer able to care for a cat and that outright abandonment carries a $5,000 fine. We can be reached at [email protected] for any questions and more info. We really appreciate the highlight of our group and hope more can join us.

Missed it this year

but I'm surprised I didn't hear the deafeningly loud dance school van from where I was, several miles away.

It's like March again: Bank shuts one branch, limits access at others due to Covid-19
Roslindale's annual snowplow display comes to an end; Belgrade Avenue garage to be replaced with condos
Chinese takeout, Middle Eastern market and yogurt place in Roslindale Square could be replaced with six-story residential building
Shots fired on Beech Street in Roslindale
Boston Apartment Availability Percentage Spikes in Key Neighborhoods - Reveals Ominous Trend
Roslindale gets its Thai back