Old-school Brighton bar to be torn down for condos 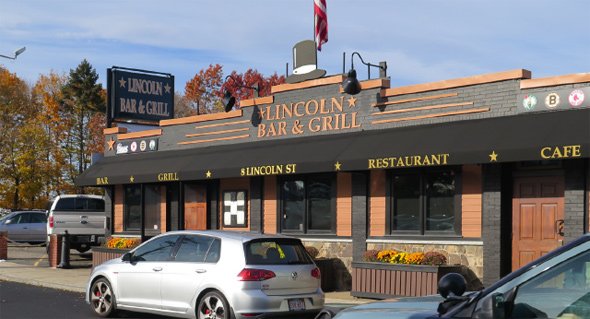 Could soon be last call for the Lincoln Bar and Grill (from developers' filing).

Developers this week filed plans to tear down the Lincoln Bar and Grill and a neighboring office building so they can put up an 82-condo building at a formerly nondescript location that's suddenly become hot because of massive nearby development.

In their filing with the BPDA, developers Barry Polack and David Murphy called the half-acre lot, on Lincoln Street at the corner where Market Street changes into Birmingham Parkway, "underutilized" and said their project would provide "much needed home ownership (of market-rate and affordable on-site housing at a desirable location next to a city park and within a short walk to a new commuter rail station."

The developers are proposing 65 parking spaces.

The Lincoln only a few years ago replaced its tiny porthole windows with more modern and larger rectangular windows after it changed owners and names - from Hogan's Run, which was itself a name change from the original Lincoln Cafe. During its Hogan's Run days, the owners promised:

We can't promise you a rose garden, but if you're nice we may be able to provide you with a clean glass.

Polack and Murphy described their new building, which would be down the street from where a decaying Black & Decker building is now being replaced with 132 apartments and just over the turnpike from the massive New Balance development along Guest Street:

The proposed building has been situated on the site to present an impressive image to the Parkway and accent the main approach from the westbound traffic coming over the Market Street/MassPike bridge/overpass. This massing serves to buffer the playground and smaller residential scale neighborhood beyond from the hustle and bustle of Leo M. Birmingham Parkway. Then the building is stepped down in height and density approaching the park and is set back with a large side yard before merging with the greenway of the playfields. There will be private yards and shared roof terraces overlooking the open space and green of the park. The stepped profile also mitigates shadow impact on the playing fields with the exception of the late afternoon during the winter when the fields are not in use. Bummer!! There goes the

Bummer!! There goes the neighborhood. :(

i saw a lot of crazy stuff go down in that place over the years. the stinking lincoln. at one point it was called the 8Ball but im not sure why? this place was like Cheers if it had been located next to a methadone clinic and nobody cared what your name was.

I knew some folks who worked

WHEN BFI BRIGHTON SECOND SHIFT 1984 - 1986 SHOWED UP AT THE STINKIN LINCOLN EVERYONE LEFT BECAUSE A FIGHT WAS ABOUT TO ERUPT !! I USE TO CASH IN MY TOOLS I BOUGHT FROM THE NIGHT TIME TOOL DEALERS AT PORTER POWER CABLE FOR WARRANTY CASH TO BUY BEER AND DOPE FOR THE NEXT NIGHTS SHIFT AT BFI BRIGHTON. >>>BOSTON HAS TURNED INTO A REAL MODERN SHIT HOLE ALL THE FAMOUS BARS, DIVES AND HANG OUTS ARE GONE NOW!! KING ARTHURS IN CHELSEA WAS AWESOME AS WAS THE NAKED EYE AND THE SCENE IN THE COMBAT ZONE. AT THE HEAD OS THE CLASS WAS THE INFAMOUS ROCKING HORROR PICTURE OF BROOKLINE BRIGHTON BOSTON MASS THE BELOVED ANIMAL HOUSE ONE BLOCK BACK FROM SCARY ANNS AT THE CIRCLE 1869 BEACON STREET APARTMENT 2 REPLETE WITH RELIEF HOLE 3RD DECK FROM BLIZZARDS 77 78 84 85. HURRICANE RECORDING AND MOTION PICTURE STUDIOS FOR EVER AT 1869 BEACON STREET KAY PARKER AND THE PIZZA GUY AND THE DEVIL INSIDE HER AT THE PILGRIM THEATER IN THE ZONE. STAR DUST VIDEO NEAR KING ARTHURS. RAT RILEYS AND THE RAT FOR EVER

I grew up at 20 Lincoln st in the 60s. It was the 8 Ball then, because it's 8 Lincoln st. And they had a pool table.
Back then Honeywell and Elm Farm Foods was on the other side of the pike and the workers went in after work for a beer or 2 or 3 or.. you get the picture.
I was a kid then an built a shoe shine box and shined those guys shoes in the bar. Everybody there loved me and called me mousey. The good old days.
There was also another bar around the corner called Curleys Tavern on the parkway between the barber shop and the glass shop. I made a good living as a kid shining shoes

Was really looking forward to that Dropkicks show there, bummer

Great! More market-rate apartments without enough parking.
Because what that intersection desperately needs is 60+ more cars with 20+ people looking for street parking.

What Boston desperately needs is housing. A roof over a persons head is a necessity. A car in a city is not.

Nice of you to take a break

Nice of you to take a break from shaking your fist at traffic long enough to chime in!

This is about far-west in

This is about far-west in Boston as you can get! 1 bus line and a "short walk" to a commuter rail station. Year right. More like half a mile... everyone who lives in this area absolutely needs a car. What everyone in this area doesn't need is more overpriced housing.

I've Been Drinkin' at The Lincoln

own the land the bar is on already? Or do they plan on the city taking it via eminent domain?
I don't get it...

No, they're not takig it by eminent domain

No clue if they already own the land; but if they don't, I bet they have a P&S contingent on them winning the proper approvals.

Only governments can take land by eminent domain. While the Supreme Court has ruled a government can then turn that land over to a private developer, no, Boston isn't doing that here.

But why do you seem so surprised the owner of the land might want to make a profit and sell?

unless the owner is in their 70s, a bar in an area booming with development with a pretty steady clientele already in place seems like a money printing factory, not to mention that further down the road the parcel will be worth even more than it is now.
If the landowner doesn't own the bar, then it makes a little more sense.
Whats there now is VASTLY improved compared to Hogan's Run which, while I DID love that place, was a total shit hole. Next closest bar in Boston would be what? Irish Village on Market St? There's that shitty place Miller's Tap at Watertown Mall but....not a lot of watering holes in an area about to be packed to the brim with residents.

Sometimes people show up with

Sometimes people show up with a truckload of money. They may even have a right to open a bar IN the retail space of the property once its complete.

Also, the Stockyard has a huge bar, and there is the Rail Yard, and soon to be Flatbread Pizza and Bowling all around that block with more planned. Also there is Article 24 on Western Ave by Mahonies and given that most of the residential construction is on the south side of Guest St Union Square and Deep Ellum / Model / Etc is not far away at all.

I play trivia there almost every Wednesday!

when I was a kid, I learned how to play pool at the Lincoln.

Is this this the same place.

If they built out retail space on one side on the first floor for a neighborhood bar, it'd be a win-win.

Is the affordability requirement 13%? On site?

I believe this will need zoning relief so yes, it will have an affordable component.

In regard to "green space"; it's two blocks from the Charles River. There is grass on both sides.

Huge ass park right behind it

Huge ass park right behind it as well.

Yeah, just what we need in Brighton. More unaffordable affordable housing. If you're not section 8 or rich, look elsewhere for living space. We have seen too many of these going up in the past few years. Real housing that real people can afford would be great, but that is not the case with these high rises. Been here all my life. Might be time to get the hell out of dodge! As soon as my rent goes up I'll be looking again and I can tell you that I couldn't afford anything I saw in the last year so this is not going to help.

Rents at the middle and lower

Rents at the middle and lower end of the housing stock are actually stabilizing; rents at the high end of the market are still growing but "concessions" (one/two month free, etc) are creeping in.

Increasing inventory is the only way to stop rent growth. If there's only x apartments and there's 2x people wanting them, somebody is always going to be willing to offer more $$ than you to get one of them.

I am sure I've posted this story here ad nauseum

but back in my days of apartment hunting in the SF Bay Area, you would go to a perfectly modest apartment viewing (a 350 square foot 2 bed, unrenovated from the 1920s, no light, a long walk to anything- the kind of place that's perfect for a 23 year old and a roommate) and find 50 Google employees with their spouses and small kids standing there bribing the landlord with triple-length leases and hundreds of dollars extra rent.

It is important to build housing, because when there is not enough housing, the wealthy will just throw money at the problem until they secure any housing.

You have to have somewhere

You have to have somewhere for all the yuppies to live so they don't try to compete for your "real housing" and turn it into luxury housing by virtue of moving in and outbidding the prior residents.

Take off the glass atrium thing

And it's an apartment block in some third-tier city in Russia. When did Soviet Union circa 1971 become the prevailing architectural trend for residential housing in Boston? (And who's the 9 ft. tall guy on the sidewalk?)

Not really gonna miss the Lincoln .

Only really missed it when 3 fingered Pete
Stopped making the best pizza around other than that its fitting right in line with how allston has disappeared.
ALLSTON is what I really miss