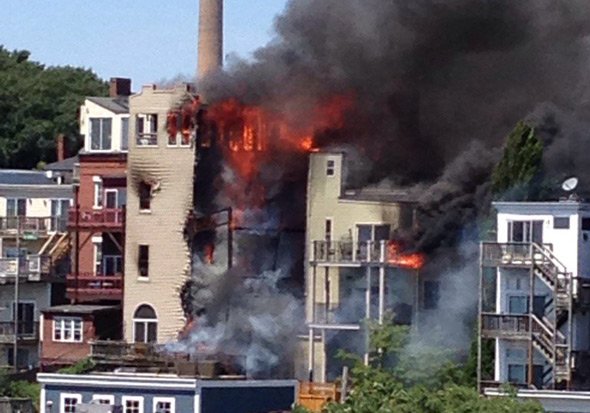 A fire reported around 1:45 p.m. at 284-286 Bunker Hill St. spread to an adjoining building and went to six alarms, the Boston Fire Department reports.

No residents were reported injured; several firefighters were being evaluated.

UPDATE: The department reports that embers from the fire sparked a second fire shortly after 5 p.m. at 9 Cook St., 200 yards away. Firefighters quickly put that out.

I biked my usual route through Charlestown this evening.

Traffic was rather light - much lighter than usual on the North Washington Bridge and especially on Chelsea and Main Streets going outbound. I guess people heard the news and didn't take the usual "shortcuts".

News copters were buzzing around like giant wasps on a watermelon rind.

The smoke and cinders were all blowing off over Medford St. and over the Mystic River, so no smoke or debris on the upwind side.

Bunker Hill Ave was blocked with police cruisers and the cops standing ready to divert traffic.

Most touching: When I was on Main St., several fire trucks were heading back toward other neighborhoods of Boston. There were a lot of people on the street and nearly all stopped, turned, and applauded. Motorists honked horns. The firefighters were waving. The gratitude was palpable. Between the wind and the heat and the dryness of everything, this could have been far uglier.

When I reached the neckdown where Medford St., Bunker Hill, and Main meet, everyone came to a total stop as a firetruck from the firehouse pulled slowly down the hill and into the station. The guys looked totally beat when they stepped off and walked right over to a guy holding a hose for them to dive under.

A young policeman on detail

A young policeman on detail spotted smoke from Bunker Hill and Pearl. He called it in and evacuated the residents st 284 Binker Hill. This guy saved countless lives and homes.
Thank you officer. A greatfull Charlestown resident.

Chilling to think of how it could have spread.

Cousins of a acquaintance of mine - they weren't home at the time but lost everything except what they had with them or were wearing:

It takes a village to find a dog that runs off in a panic when the USS Constitution fires its cannon at noon
Rising sea levels can't sink waterfront homes that float: Developers propose replacements for decaying Navy Yard pier
They stopped in the name of love in the Charlestown Navy Yard and now one of them faces federal charges
Soon may the ferryman come
Proposed 240-unit residential building wrapped around the Charlestown 99 might eventually be joined by more housing
Car flies off I-93 at the Zakim, lands on Leverett ramp, driver survives