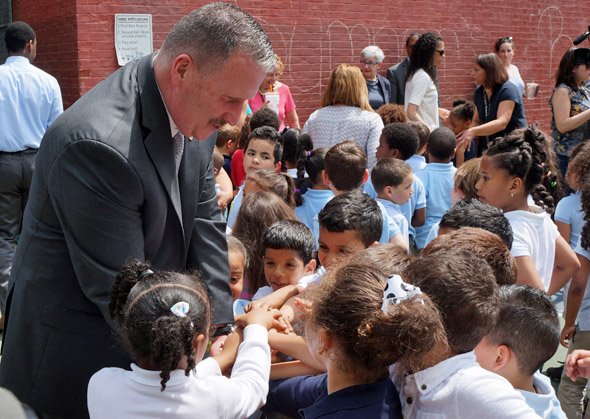 Fire Commissioner Joe Finn and Sumner kids get ready to do a cheer.

BPS officials promised students at the Sumner School in Roslindale today that their arson-ravaged playground would be rebuilt in time for the opening of school in September.

At a ceremony at which kids thanked the firefighters of Ladder 16 and Engine 53 in Roslindale for keeping the fire from spreading, officials praised the kids for their reaction to the fire - they raised $277.45 in a lemon-aid sale - and parents and local businesses, who have so far kicked in more than $60,000.

Assistant Fran Campbell said The Cooperative Bank donated $500 - and hula hoops and chalk. Tomorrow, 20% of the proceeds from food sold at California Pizza Kitchens across the state will go to the playground fund.

Boston Fire Commissioner Joe Finn thanked the school's 600 students for all their thanks for the local firefighters who put out the firet. "It was a tragic day," he said. "It's OK to be upset when something bad happens," but the Sumner School kids and teachers have turned that into something good, he continued.

Kids who want to be firefighters when they grow up raise hands: Students acknowledged their sadness at the fire - for which two teens and an adult face charges. "I made so many memories at that playground and now they're all burned up, Taylor Jones, a fifth grader, said. Two California Pizza Kitchen workers also addressed the kids - and got a hearty round of "Yippee!" when they said they came with cookies.

Firefighters from Engine 53 and Ladder 16 drove up and gave the kids tours of their trucks: Why the hell are they installing a surveillance system?

There's no rash of arsons on playgrounds - this is the first time in years (decades?) this has happened, and they caught the people almost immediately.

How much is that system costing? And how much school supplies would that money buy?

Our teachers are going and spending their own money on paper, pencils, chalk, etc and BPS is installing $ecurity $y$tem$?

It's not the first time this has happened in decades. It happened the month before at the same school and a few months before that at the Ohrenberger.

Don't worry about kids being deprived of chalk: The system will be paid for through the funds raised by parents and local companies.

Hmm, good point. Well at least there's not a bear in sight. The Bear Patrol must be working like a charm!

Great response from everyone, the surrounding community, the city, the students, teachers, administrators and parents of the school. Really nice to see how such a stupid, mean-spirited act brought these groups together.

Gregory Laham, who found way to keep his Roslindale pharmacy thriving amidst onslaught of chains, dies at 73
All aboard: Roslindale model railroaders resume semi-annual public visits
Fire displaces 15 people, 4 cats in Roslindale
Add fisher cats to the list of things that live in the Arboretum
Retired Boston cop laid to rest on anniversary of Roslindale bomb explosion that killed his partner and left him with permanent injuries
Boston will extend morning bus/bike lane further down Washington Street in Roslindale