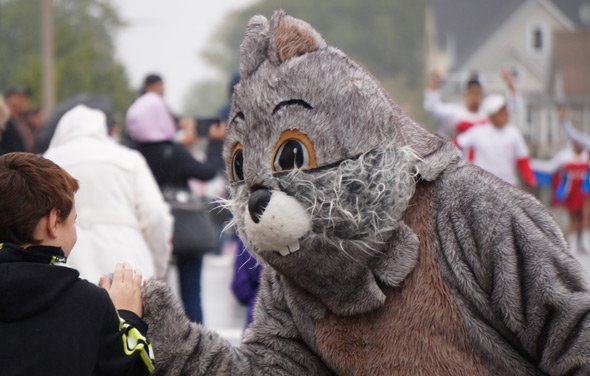 UPDATE: What your reporter thought was a short-eared bunny was, in fact, Sammy the Squirrel. Clearly a future in fuzzy mascots is not in the cards.

A light drizzle failed to halt the 41st annual Roslindale Day parade from its traditional route down Belgrade and back up South Street.

As always, the firetrucks started things off: There was, of course, plenty of marching-band music: And it wouldn't be a New England parade without at least one band of pipers: This guy probably took the highest selfies of the parade: The Rozzie Dolls belted out tunes on a float they shared with a walking Dunkin' donut, who was either exhausted or afraid he'd melt in the rain, because he stayed in a chair rather than walking like he usually does: A local Boy Scout pack had a float about the fun you can have fishing, especially if your head is a styrofoam ball: And, of course, it wouldn't be a Roslindale Day parade without the official Roslindale Saturn station wagon: Ears are kind of short for a rabbit, I guess. There was definitely a large walking otter in the parade - the Coast Guard's Sammy the Otter.

That rodent is scary as hell

And I'm a grown man that as seen some bad stuff.

Edit: Oh wait, nevermind. It's confirmed a squirrel, and so totally not gross. Still creepy though.

The two final photos are the same--looks like a posting glitch.

Thanks for letting me know.

A squirrel to me. Would need to see the tail for confirmation, lol

Having worn the costume as a former employee at Mass Audubon's Boston Nature Center, I can confirm this is Sunny the Squirrel. The tail is massive and fluffy.

I went up to the parade, today. A shame about the weather - blah.

That is one longggg route.

I was there. Steve Murphy marched with wife and a small contingent. Joe Donnelly marched with his daughter and grandkids. (How cute is that!) I saw some Margherita signs but not her, herself. Councilors O'Malley and Wu marched, and I think Tim McCarthy. Councilor Flaherty was there, somewhere; I saw him beforehand.

Yeah, there were a lot of costumed animals - or, costumed people, I guess.

There was a "pro-life" contingent. I heard they got into a shouting match down on South Street with a couple of broskis.

Pro-life member came over to

Pro-life member came over to chat (I am visibly (very) pregnant) and said, "I know you're pro-life!"

Really offensive assumption and an unpleasant interaction. Only damper on the famazing parade!

But I had my own pro-life exchange, too! Was minding my own business, taking photos, one of the pro-life guys came up to me and exclaimed "Vote pro-life!" To which I gave him a thumb's down.

"But you're not a woman!" he returned. I admit I responded by muttering an expletive phrase that was loud enough for him to hear but not the little kids near us. I hope.

Wait, so someone approached you

And from what you described, respectfully expressed their opinion and you responded by acting like a dick... How very "Liberal" of you! And no im not pro-life.

I responded equally peacefully. Or am I not allowed to give him a thumb's down? Oh, right, only one side has the right to express themselves.

Yes, the swearing was not the smartest of things, but it's not like I started screaming at him.

it wasn't an opinion

.. really, the anti-choice gentleman was giving an order.

at any rate its suuuuper funny-ironic-depressing that his retort to Adam was.. that he wasn't a woman. kaaaaay.

not to the pro-life message, but to the incredibly presumptuous and hypocritical double standard the guy was applying, i.e. "It's OK that I, a dude, am out here publicly advocating for the suppression of a woman's right to choose, but it's not OK that you, a dude, are weighing in with your opinion about women's rights."

Or perhaps Adam is just pointing out what most folks are too polite to point out in public, which is that anti-choice assholes who show up to public events and harangue pregnant women should go fuck a pinecone sideways.

How'd I miss you?

Saw Murphy (how could I not - he was behind a sign that stretched across the entire road) and Donnelly, and the guy working the sidelines handing out Ciampa-Coyne fliers ...

Thank you to Tom Donahue and

Thank you to Tom Donahue and Andrew Cousino and the rest of the Roslindale Parade Committee for putting on this parade every year! Another Great Job!

The cop helping the lady is a

That lady needed to be helped because

she has her head buried in her cell phone. Oblivious to the lights and sirens bearing down on her.