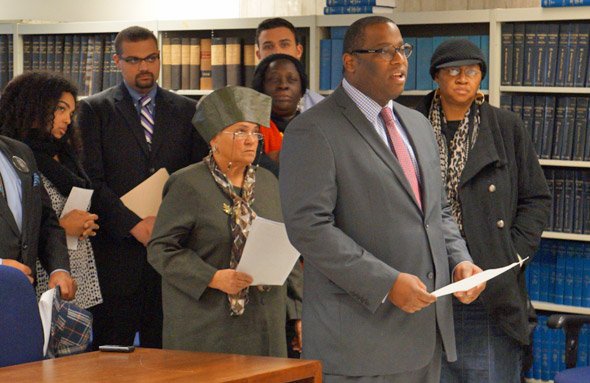 Councilor Jackson led the charge against proposed liquor store as other residents waited to testify.

Grove Hall residents and religious leaders packed the Boston Licensing Board hearing room today to urge the board to reject a license request for a Blue Hill Avenue liquor store.

The proposed Blue Hill Liquors, 438 Blue Hill Ave., is "absolutely tone deaf to the people of Grove Hall," because Grove Hall already has eight liquor stores within a half mile of the proposed new store and because would-be owner Janika Rana went ahead with her license request despite residents telling her at an earlier community meeting that they don't want another liquor store, City Councilor Tito Jackson said.

Jackson added that what the neighborhood needs is not more liquor stores, but sit-down restaurants - like the ones in South Boston that crowded the board's agenda today, Jackson said.

Rana's attorney, James Juliano, said that despite the existence of several liquor stores, Blue Hill Liquors would meet "the public need" by concentrating on Masssachusetts beers and wines and by offering wine tastings, which he said the current stores in the area do not. Rana, an Indian immigrant, would also offer classes for local women on becoming entrepreneurs.

Residents said that if Rana, who currently owns a convenience store on Tremont Street in the South End, wants to open a liquor store so badly, she should do so in Woburn, where she lives, not in a Boston neighborhood that is trying to clean itself up from problems caused in part by alcohol.

"I really, really resent the fact that most people are trying to use our community as a dumping ground," resident Fatima Mohammed said.

Juliano said Rana would take steps to avoid the loitering and other problems linked to liquor stores, including hiring Boston Police details if needed, requiring everybody, regardless of age, to present ID and banning anybody found to be buying liquor for minors.

But Emmanuel Tikili, who has long been active with programs at the Frederick Pilot School, said the last thing neighborhood students need are more liquor-store customers harassing them. "We are tired of people taking advantage of the young people of our community."

The board could decide whether to grant the license at a meeting tomorrow.

The people of Grove Hall are absoutely tone deaf to those who wish to set up a business in the neighborhood.

Sadly, however, it's the business person who has to disprove the idiotic claims, not the whiners who have to prove them.

Will save Grove Hall, I'm sure of it.

Then work with your legislators to change it. Until then, the law of the commonwealth is that applicants for liquor licenses have to prove there is a "public need" for them and folks like Jackson and his constituents have every right to argue there is no need.

The LLA is also required to provide evidence that there *isn't* need if they reject the applicant (previous rejections based on constituent gripes have been overturned by MA courts for being "capricious"). But you're right that the law very clearly states that the ability to open/run a business that sells alcohol is *not a right* and exists only to serve the needs of customers.

If I were an applicant, I'd come armed with data to back up my case that there's a need for my store. Do a survey of prices to show that you'd provide downward price pressure. Do a survey of inventory to demonstrate that you'll be stocking unique products. Do an "exit survey" of customers at other stores to demonstrate that they are dissatisfied with existing options or are interested in the new programs you're planning to provide.

This general reliance on conjecture and anecdotes to evaluate something for which a quantitative, objective metric already exists (namely, whether the business actually attracts customers) is exceedingly frustrating.

Do a survey of prices to show

Do a survey of prices to show that you'd provide downward price pressure.

I agree with the others, but don't do this study. The NIMBYs, blue-hairs, and neo-prohibitionists would probably use this data against you. You mean this store will mean more people will be buying cheaper alcohol?! The horror! The horror!

I argued with another poster in a former thread about how many liquor stores there are in the area, and I agree, another one is not going to help anybody. However, as a craft beer drinker and lover of fine whiskeys, I can say with certainty that every exisiting liquor store in the area SUCKS. Miles of Bud/Miller/Coors and their clones. What if some area stores (or just one maybe) decided to sell better product? Can we force that instead and get a few resturants to take up the available retial spaces? I like this idea much better!

There are 8 liquor stores

There are 8 liquor stores because of demand. If the residents dislike it maybe they need to quit drinking so much!

no to more junky liquor stores! Once the market has changed, a nicer liquor store will be welcome.
But yes, first we need places to sit and eat. I would love for a decent sit-down establishment to open in Grove Hall - maybe one with a vegetarian option!

I have lost so much respect for Tito Jackson.

Stopping this one will stop all the crime caused by people feeding their alcohol addiction.

As a young voter in the city council election, I do respect Tito's opposition. Liquor stores are a hallmark of the ghetto and to have eight in a half mile radius is depressing. Invest in another business that doesn't perpetuate more stereotypes in an otherwise struggling neighborhood..

Liquor stores are a hallmark of the ghetto?

That would make all but a handful of dry towns in Massachusetts "ghettoes".

I think the implication here

is more about the sheer number/concentration, not liquor per se.

It's the inventory, and chances are this place was going to specialize in nips, cigs, scratch tickets and 40s, not fine 18 year old single malts and $10/pint beers.

But not nips. No nips would be a license condition.

Could "no cigarettes" also be made a license condition?

If the city can keep tobacco out of Walgreens, couldn't they also keep it out of (at least new) liquor stores?

There are six (soon to be

You speak the truth. It's almost as if it's a double standard.

Yes Grove Hall has its share of problems like every Boston neighborhood. As a young voter I might suggest that rather then explaining the effects of liquor stores on this neighborhood you spend a minute or two visiting the businesses there or maybe visiting a few side streets. What you might notice is some nice people with nice homes. You know just like in the leafy suburbs.

So do something about the

So do something about the cause of this area being a ghetto rather than attacking a symptom. Or keep voting for politicians that do the latter just so they can keep getting re-elected because they're doing the latter.

Her Amazing Hat — It Looks Like It Was Designed By Frank Gehry!

The bottom line is this: Ms. Rana doesn't give a hizzy hoo about the Grove Hall community & its constituents because she still continues to proceed with trying to secure a license from the city for the so-called upscale liquor store she's vying to open after the community said NO!!!! We need viable businesses like sit down family restaurants, Starbucks, etc. - no more unhealthy businesses that are a detriment & an eye sore to the community.

When there are 8 liquor stores within a 1/2 mile, the want and need for liquor has already been met. Another package store is not needed. A local person would of had a better chance of gaining support than someone with no experience at all.

When the only interest a business owner shows in your neighborhood is to sell liquor products, it makes sense that Grove Hall residents would strongly object. When residents use the term ghetto liquor store, they are referring to the barred windows and poster sized advertising used to block the windows. In contrast, residents support the Tropical Foods liquor aisle in their Dudley Square market because it's an experienced owner offering more than low consumer value products like nips.

There are no bowling alleys, ice cream parlors or burrito bars in Grove Hall. I think questions like this should be left to the local community who know thie neighborhood and its struggles.

Although I agree with the rejection of the application

I believe some of the opposition is based on who Ms. Rana's is. There will be no social media social justice movement for her.

What is the real situation here?

I agree, It looks like those city council leaders is trying to get brownie points or they are already trying to campaign and out do one another. A bunch of ego seekers. In recent months, I have lost respect for many of those leaders, some I even voted for. I know half them may frequently shop at the other 8 stores in the area. I do however appose this living in Grove Hall myself. I feel the owner is a business person. I don't think the owner is looking to hurt the area. Seems the owner wanted to be given the same opportunity as the other 8 stores. Are they going to picket those?. City leaders should, if they are for real. I bet you half of their customers was at this hearing...

Meh, it's simply just another

Meh, it's simply just another liquor store in area that is awash with them. There's no need for the community, just an opportunity for someone to make more money of the backs of the black community. Mind you, I could care less about grove hall or the particular business owner, but let's not act like the ghetto isn't where people from all walks of life go to set up shop.

How can anyone afford to buy

How can anyone afford to buy liquor, given the rents?