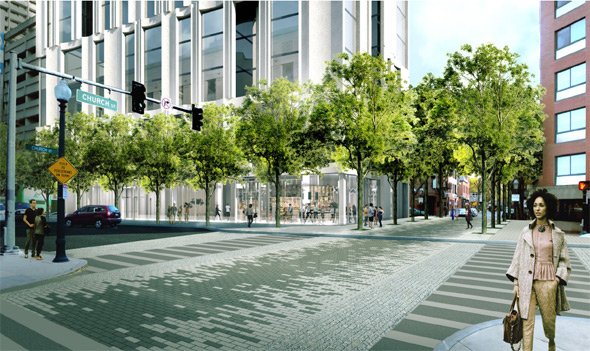 A small parking lot next to a large parking garage on Stuart Street could be replaced by a 131-unit residential building, under plans filed with the BPDA this week.

Developers Peter Spellios, Neal Howard and Bryan Lee hope to succeed where two previous - and smaller - proposals, in 2006 and 2008, failed at 212 Stuart St.

Their plans call for retail space on the building's first floor. No parking is included in their plans, but they say they would have a lease for 50 spaces in the neighboring 200 Stuart St. garage.

The developers hope to begin 20 months of construction in the last part of next year.

In their filing, they say they'd be doing the area a solid by replacing a blighted parking lot with something worth having:

Located at the edge of Bay Village and Back Bay, the Project will be a part of the transition between the two neighborhoods, and frame the Church Street pedestrian gateway to the Bay Village neighborhood from the north. The materials and form of the building are proposed to connect to both neighborhoods, while being a unique focal point in the skyline. The ground floor will include retail space to activate the Stuart Street corridor. The plaza located to the west of the site is also proposed to be improved as part of the Project. This improved plaza is envisioned to include new landscaping and hardscapes to provide an aesthetically pleasing gateway into Bay Village. In order to respect the Bay Village neighbors to the south of the site, pedestrian access and the loading bay will only be accessible from Stuart Street. Furthermore, the Project’s housing component and single small scale retail space will blend with the existing uses of the predominantly residential neighborhood. As a true connector to its surroundings, the building will fill the void in the Stuart Street corridor bringing together the streetscape from west to east, and the neighborhoods from north to south.

From the BPDA filing: Just found this column I wrote back in 2014 that gives a bit of information on the earlier two projects and also what was there before (remember Jae's?).

While it's possible a retail store could move in, I bet a restaurant / coffee shop is more likely.

Fine with me and it may depend on your perspective if you'll care or not: but neighbors should consider that as part of the discussion.

That whole block has had mixed luck with retail / restaurants over the years.

Don't forget; Jae's was there for a long time before they tore down that building.

A cafe would be nice for the elderly living at South Cove, next door.

I think it's interesting.

I think it's interesting. Would you prefer yet another box? Don't worry, the "community" will hack away at it until that's all that remains.

Yes, we will hack away until the building meets the zoning requirements of the Midtown Cultural Distict AND the Bay Village Historic District. Lots of hoops to jump through before something that ADDs something substantial to the neighborhood rather than DETRACTS from the neighborhood is agreed upon.

Considering the monstrosity which is the Howard Johnsons, I mean, Radisson, I mean Revere hotel I'd say this design is welcome. Anything which blocks out a view of that hideous Soviet-style concrete fortress is fine by me.

The building looks nice, nothing too special, but the proposal itself is really nicely diagrammed and illustrated and put together. I especially like how they always included the tall buildings that surround it, very much saying "this isn't that tall! we don't need to cut it down!"

This is 2003 architectural design at it's best. Who designed this eyesore?

Modern design belongs in the Innovation District and Downtown. not here. Bay Village is like Beacon Hill's little brother, could you imagine a building like this being built in Beacon Hill?

I'm all for more housing in that area, but I can only hope this will be either shot down completely, or tentatively approved with major aesthetic revisions.

Not really in Bay Villiage

Not really in Bay Villiage though, considering its abutters. More like directly adjacent to.

Sorry, Bub. It's IN the Bay Village Hsitoric District. And it abuts the Midtown Cultural District, also concerned with historic preservation.

Are you interested in fighting this inappropriate building at this site?

Park Square is freed of that Emancipation statue
After Boston removes that statue of Lincoln and the freed slave, what should replace it?
Boston Apartment Availability Percentage Spikes in Key Neighborhoods - Reveals Ominous Trend
Turkish salt sprinkler vows to restrain himself on future visits to Boston
Salt Bae's steak place will remain closed through at least Thursday
Salt Bae learns quickly that Boston takes its Covid-19, fire and food-preparation regulations seriously