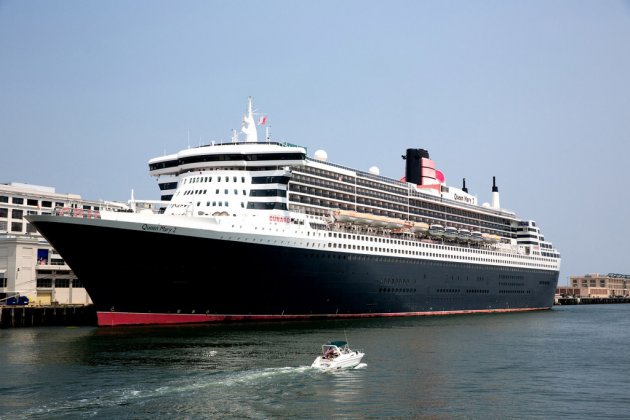 Posted under this Creative Commons license and in the Universal Hub pool on Flickr.

From the Black Falcon pier or elsewhere? Any suggestions? Thanks.

We ended up at Castle Island, which was a perfect perch to view the fireworks and the ships passing by. Both the French frigate, Le Hermione, and the Queen Mary2 departed last night, which was quite a show.

It was nice to see all the diverse family groups enjoying a relaxing summer day and evening at Castle Island. My brother and I happily noted what a change it was from when we were kids playing there in the 1960's.

Sometimes, you forget what progress has been made in the City of Boston.

Was Castle Island ever not a desirable place to go?

I wasn't here in the 1960s so I'm curious. (I did occasionally bike there to watch the sun rise while a college student in the late 1970s)

It was desirable place then

It was desirable place then but only for white people.

and as welcoming as

Franklin Park for me.

and felt fine doing it.

As a "white" kid growing up

As a "white" kid growing up in Boston in the 1960's, I went to Castle Island and Franklin Park. Neither was off-limits for me or my family. I'm glad to see that both are more integrated today.

for the worse, violence-wise, in the city (and cities around the country), between the 60s into the 70s. Jamaica Plain (part, not all, certainly not Moss Hill, or up by the monument), Roxbury, South End, Mattapan, parts of Dorchester, were all very violent when I was a kid in the 80s into the 90s.

My mom told me the beaches and Castle Island in the 70s were quite 'diverse'; I'm assuming by diverse you mean people of color?

I lived in the 80s off and on as a kid in Jamaica Plain,Hyde Square area, as a white kid, and it was a majority minority neighborhood. When I go back to JP today, the gentrification,and from my point of view, greater socioeconomic stratification, regardless of a person's skin color, is shocking. But no doubt the level of violent, random street crime is less today in JP than it was when I was a kid. I got jumped so many times I stopped counting after the 10th. Bag-purse snatchings, street robberies, random people getting jumped and beat up, were daily occurrences.

She just meant some Italians were allowed on the beach.

Oh, how time flies. Seems as if it were just yesterday that we boarded the Queen Mary 2 for a 3-day trip to nowhere out of New York City.

There is a special relationship between Cunard (now owned by Carnival) and Boston. Boston was its US port for many years (in East Boston, then the South Boston Waterfront). As explained on this website:

Upon the selection of their city as the American port for the new Cunard transatlantic service, the citizens of Boston rejoiced. They were delighted that their city would play host to the Cunarders; bringing essential commerce opportunities to the people of Boston. So great was the goodwill that Samuel Cunard earned celebrity status in and around Boston ...

To further celebrate, the merchants of Boston commissioned the creation of a spectacular 2.5-foot-tall silver cup, which would be offered to Samuel Cunard as a gift of gratitude.

Unfortunately, the cup was not completed in time to present to Cunard when the first ship (the Britannia) arrived in port, in 1840. Then, it was lost until being found - in a Maryland antiques shop - in 1967. The cup resided on the Queen Elizabeth 2 (we still miss her!) until the Queen Mary 2 became Cunard's flagship.

The lid to the cup is still missing!

Obviously the people in the stern must be undercover, on duty officers.

I constantly see people who

I constantly see people who look to be families of officers on the harbor patrol boats. It really bothers me. Either the officers are getting paid to go on a pleasure cruise, or they're endangering members of the public if any of the boats they randomly pull over end up actually being drug runners.

that Macka had his family involved in a rescue drill so it's legit.

Maybe you're just angry in general?

So you don't actually know that these are families, but your imagination runs wild and the results really bother you. Do I have that correct?

It may be the SEC.

How else do you think Florida

How else do you think Florida alumni get around?

Those are the Hot Cops

in the BPD boat above.