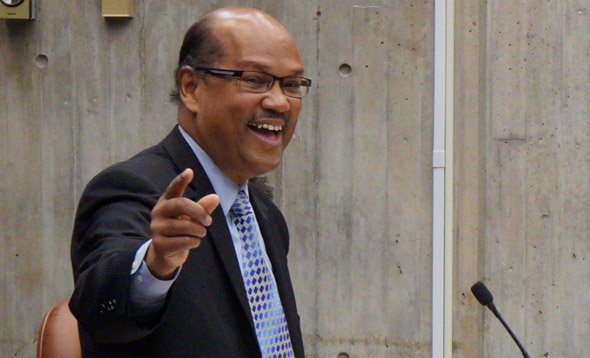 Boston city councilors and Mayor Walsh said goodbye to councilors Charles Yancey (Dorchester) and Steve Murphy (at large) at their final meeting of the city council.

Walsh presented the two with Revere bowls for their years of service - 32 for Yancey, 19 for Murphy. Both lost their re-election bids in November.

Council President Bill Linehan pointed to a new library, a new police station and parks in Yancey's district as proof of his tenacity. He praised him for his continuing efforts on behalf of the disenfranchised.

Linehan noted Murphy's work on increasing payments in lieu of taxes by local colleges and other non-profit organizations.

"I feel like I'm getting ready to graduate college," Yancey said.

"I was going to talk about building a high school," he said, half jokingly, referring to other unfinished business he said he still has, including getting police to wear body cameras and improving the quality of Boston schools.

Councilors Tito Jackson (Roxbury) and Ayanna Pressley (at large) both teared up in calling Yancey a mentor.

Murphy (and McCarthy and O'Malley) listen as LaMattina praises his colleague.

Murphy quoted Burke, Socrates and Yeats in praising life as an elected official with the trust of people in the neighborhoods who send you to City Hall. "Elected life is over-examined, and it is worth living."

As he has throughout his career, Murphy blasted the "monotone press" with "vested interests" he said exists in Boston.

But then he added Boston is just becoming better and better, as shown by its population increases: "This city is on the move upward, so we must be doing something right."

As he concluded by thanking his colleagues, he choked up before sitting down - like Yancey, to a standing ovation.

If only those cheering masses

showed up to vote.....never mind, it's lunchtime at city hall...

Without that hefty councilor salary, they still can't say they don't have a pot to piss in.

Revere said the voters are coming!

The voters are coming!

Council Presidents that kept public records out of reach.

Will the next Council President take up Council Records Management practices!?...

Murph could be back

If something happens to one of the 4 at large

Hope that's the last of him.

Now how do we get rid of those who remain?

I wish Councilor Yancey would move to South Boston and take Linehan's seat.

I'll run for the seat if he does. Hell no.

This is what's wrong about government

It's one thing for people to have voted these guys out (that's the point of representative government), but the piling on for these guys gets to me, a guy who has proudly voted against Murphy in every election he has been on the ballot for since 1992.

Yes, Yancey served too long, and Murphy by and large was a moron, but their hearts were in the right place. Yancey, for most of his tenure, worked hard for the constituents. He was the only person in government who wanted a new library in Mattapan. He reveled in raking department heads over the coals as chair of the Oversight Committee. Murphy ( and remember, I actively voted against him for city, county, and state posts) was a lot more progressive than people make him out to be. Put him on a board in the South and he's Bernie Sanders.

So, yes, look forward to Cambell and George come January, but let's give these guys their last day.

" their hearts were in the right place"

Please. They weren't in office because "their heart was in the right place". They were there for the money. Decent money for a very flexible schedule, a pension, and unfettered (basically) access to their own slush funds/campaign funds.

There are other jobs out there

All of those would provide greater bank, without the public scrutiny they faced on the Council.

Other councillors went that route, mostly on their own. The argument could be made that Murphy couldn't make it in the private sector, but he'd clean up adjacent to the public sector. As for Yancey, you can fault the guy, but his legacy is caring for the community.

You seem to be

cynical. These are two great Americans who sacrificed high cholesterol, weight gain and post traumatic back slapping injuries just to serve the people. The people, in recognition of this sacrifice, retired these two historic leaders. From this day on the pantheon of American exceptionalism will include Washington, Jefferson, Murph, Lincoln, Roosevelt, Yancey, Kennedy, Reagan...

And I was wrong to be cynical. I didn't give enough thought to the dedication big Murph showed. Not everyone can sit at Ruth's Chris, or Abe & Louis's multiple times a week for the good of the City. Kudos to both of them.