Only 2 council races have preliminaries this year; meet the challengers in one of them 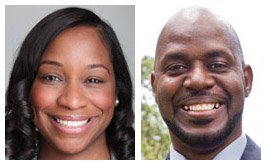 Two challengers look to unseat the longest sitting city councilor in September's preliminary election for District 4, which includes parts of Dorchester, Mattapan and Jamaica Plain. We talked to both Andrea Campbell and Terrance Williams. Councilor Charles Yancey did not respond to several interview requests. A fourth candidate, Jovan Lacet, will be listed on the Sept. 8 preliminary ballot, but Lacet says he has dropped out of the race.

Andrea Campbell of Mattapan is a newcomer to the race for public office after serving as deputy legal counsel for Gov. Deval Patrick. Terrance Williams of Dorchester is back after an unsuccessful 2013 run against Yancey.

"I was thinking a lot about the loss of my twin brother," said Campbell on her decision to run. She says her twin Andre died three years ago after not receiving proper medical care as a pre-trial detainee in the custody of the state Department of Correction. Andre and Andrea both grew up in Boston but had very different life outcomes, Campbell said. She credits her success to having better schools, mentors and job opportunities than her brother did.

"It's not easy when you challenge someone who's been there for over 30 years, or another gentleman who has run before. They both have name recognition and I don't. So I pushed past the fear [of running] after thinking about my twin brother."

On his decision to run again, Williams said, "My grandmother told me a long time ago, 'When you're sick and tired of being sick and tired, do something about it.'" He's spent the last 25 years working for Boston Water and Sewer and the Suffolk County Sherriff's Department.

Both challengers say they strongly value community organization and would like to increase the collaboration among organizations across District 4.

"District 4 is wide, it's vast, but there are resources all across this district so I want residents to feel more connected," said Campbell. "[I want them] to know that their neighbor in Jamaica Plain cares about similar issues as we care about in Mattapan and Dorchester. They might have creative solutions to things they're already working on that could be useful to this side of the district."

Campbell said one of the first things she would do as city councilor would be to hold a town meeting with stakeholders across Boston and District 4 to open a dialogue about issues facing the residents.

Williams, who has been involved in community organizing since he was 20, said he believes in bringing many groups together to work towards solutions.

"[We should] utilize every resource that there is. Everybody has their own ideas and issues that they're trying to work on but if we can all come together as a group, then we can get a whole lot more done," he said. "Everyone should know their next door neighbor and around the block and so on. We should all come together and unite and educate people on what's happened with the city of Boston, ask them to get involved."

"If a parent wakes up and cannot identify a quality school from K to 12th grade for their kid to go to, then we have a problem," said Campbell.

Campbell said her own experience as a BPS student who went on to Princeton University and UCLA Law shows BPS can work. "Those teachers, those leaders, those principals all played a role in my success," she said. "Those were all people at traditional public schools so we know the system can work. It's a matter of identifying those schools that are not doing great and doing something about it. I am passionate about focusing on traditional public schools without alienating those parents and students who go to a charter school."

Campbell said if elected, she would focus initially on accessible constituent services, strategic funding and planning, public safety and education.

Before her official campaign launch last year, Campbell began with a six-month listening series where she met with local leadership, spoke to residents and attended meetings to take notes and hear concerns.

"There are a lot of issues that people care about," said Campbell, "Education, affordable housing, cycling, different modes of transportation, gentrification, displacement, health care disparity – a long list of issues. I can't possibly address them all but I wanted to start with some," she said.

Williams cited crime, disrespect to elders and the unrestricted power of corporations and universities as key issues facing the district.

"Universities are buying up everything and paying little to nothing," he said. "We need to stop going after the people who live in Boston when we have buildings and corporations who are not paying their fair share taxes. It's unacceptable."

One of the key issues facing District 4 is violence. While gun homicides are down this year, nonfatal shootings are up, with some areas in Mattapan and Dorchester being among the most violent areas.

"We could also do a better job with community policing," said Campbell. "Some parts of the district have police patrolling the same neighborhood. They're not just there for crime but to build relationships. They attend the civic association meetings. How can we make sure that is consistently happening across the district, not just in response to a shooting but actually making sure that's what we see all the time?"

Both Campbell and Williams also support body cameras on police officers, as does Yancey.

Historically, District 4 has had relatively low voter turnout. Both Campbell and Williams have the same message for constituents on September 8: Get out and vote.

Campbell said over 70,000 people live in the district. About 40,000 are at voting age and close to 30,000 are registered to vote. However, to be elected city councilor, a candidate only needs a few thousand votes.

"That's not okay," she said, "We want more people to come out because in order to push for more things to come into this district - more services, more opportunity for our young people, more resources - we need our residents to show up to push for those things with their city councilor."

"No matter who you vote for, just come out and vote," said Williams. "When I'm out there, I'm speaking from my heart. I'm real sincere about what I think. I love the people of Boston. I know Boston can be one of the greatest cities that other cities can follow."

The top two finalists in the Sept. 8 preliminary will face off in the final election on Nov. 3.

was that a breath of fresh air I just felt?

either one of these two could have a huge impact on Mattapan post-Yancey.
best wishes to 'em...

Any District 7 or District 4 neighborhoods not mentioned?

For the most part the section of Roslindale that is in District 4 is bounded by Cummins Highway and Hyde Park Ave and includes Mt Hope St, Neponset Ave, and associated side streets. Some people are starting to call this "East Roslindale, which is rather odd to old timers but then we do read about "SoBo" here, now don't we?

So unless if not certain check to see if you are in Dist 4 before you head off to the polls in September. Most people in Roslindale will not be voting till November in the final election, and that is because no one was running against the incumbents, so there is no need for a preliminary election.

..no portion of Hyde Park is part of District 4; is this right?

Hyde Park is completely in district 5. In fact, it also has the lower half of Mattapan, including Mattapan Square.

We need more women on the council!

I get the impression that Andrea Campbell actually engages with the community, listens to constituents, and respects what they have to say. Counsellors Wu and Pressley are like that too.

what does being a women have anything to do with being the best person for the job?

When your name is

One of her campaign workers rang my bell looking for votes.
He was honest when I asked him if he was campaigning for her because he really likes her positions or because he's hoping for a job if she's elected....he said both.
I haven't decided yet who I'm voting for but it sure isn't going to be Yancey.

That question reminded me of this:

Paying it forward in Dorchester
One shot, one stabbed in Newmarket Square
Five people shot at Franklin Field in Dorchester, one dead
Federal judge bets former Marine can help brother get on the straight and narrow after gun conviction
TechBoston Academy leader dies, 52
Two shot in separate incidents less than a mile apart in Dorchester