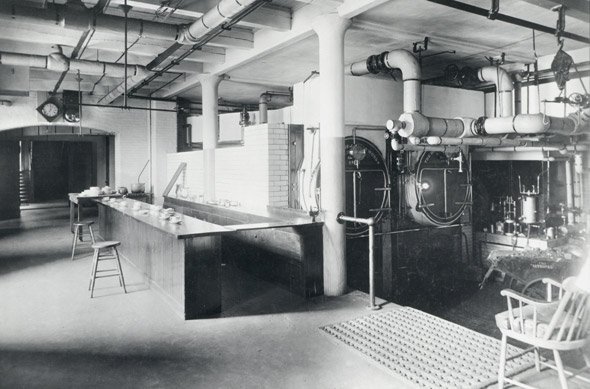 The folks at the Boston City Archives wonder if you can place this photo. See it larger.

Neighborhoods:
Boston
Topics:
History
Ad:
Like the job UHub is doing? Consider a contribution. Thanks!

Taken last week, some several-million-dollar condo in some renamed neighborhood like eabo or sowa.

You win the internet today, eeka!

The laundry room on the 2nd floor of the Pine Street Inn but just how many folks have ever seen that? It was the fire department HQ way back when.

for the new HBO series THE BOILER ROOM starring Ben Affleck. Everyone cleared out in a hurry because Skip Gates just showed up & revealed all their ancestors were slave owners ;-)

I don't see any evidence that the scene has anything to do with a laundry.

On the lower level are two coal-fired steam boilers, a wheelbarrow labeled "The National" full of coal, and a wooden-handled coal shovel behind it. Note also: the monorail tram system attached to the ceiling, with block-and-tackle hoist to assist in transporting coal and ash in and out of the room. Such boilers would need to be tended 24 hours a day, hence the thick cushion on the captain's chair where the stoker would sit and nap.

It's a decent sized building, but not huge; perhaps something like a hotel or hospital that would have a staff of workers. The "lunch counter" did not serve the general public, nor the primary occupants of the building, but rather a place where some of the workers could be quickly fed. It's not somewhere people would tend to linger. Despite all the chinaware, there's no sink or any kind of food storage or preparation area, so there must have been a much larger kitchen somewhere else in the building or close nearby.

While there's no electric lighting, gaslight jets hang from the ceiling; their globes have likely been taken down to be washed. Some crude electrical wiring appears to be associated with the clock and bell, perhaps to alert workers when their break is over. The building was rather new when the picture was taken; I would guess no more than ten or fifteen years old.

Only the boiler on the right has a head of steam, so it's probably not the dead of winter. It might even be summertime if the steam was used to make hot water or to operate steam-fired equipment in a large kitchen.

My favorite item in the picture is the absolutely fabulous woven floor mat; a superb solution to prevent coal dust and ash from being tracked out of the boiler pit!

I noticed the same things. The amazing part is how clean everything looks, even the boilers. Coal is not clean so they must have worked hard to keep it this way. It appears there are 1/2 eaten sandwiches on the table which could indicate the workers moved out of the frame for the photo and presumably continued their lunch afterwards.

I'd agree it's a hotel or hospital, likely one of the higher end ones. Maybe MGH?

Had to keep coal fired

Had to keep coal fired boilers clean. Coal dust can kaboom if not well policed.

I Agree, The Cleanliness Is Striking!

But I think the lunch break ended 5 minutes earlier, or else it hasn't occurred yet and the counter is pre-set because the attendant knows exactly how many people to expect.

If this were a hotel, there would be a large staff of housemen. These men would do the heavier cleaning throughout the building; sometimes assisting the craftsmen or engineers in keeping things in working order; but above all, maintaining the appearance of all areas with the highest level of cleanliness.

In a well run building, the maintenance staff would be large enough so that back areas, basements, and even the boiler room would receive attention, especially if it was their own break area.

Made By Hodge Boiler Works Of East Boston In 1902

( assuming that's a date and not a model/serial number )

A shot in the dark

Boiler room/basement of the YMCA on Huntington Ave? It looks just like their old basement, and they used to have a matching clock in their elevator lobby.

(And lest you wonder why I was crawling around in the YMCA's basement, I used to work there. The boiler room/laundry room was where they kept the recycling pile, for some weird reason.)

Thanks for playing, folks! This is an 1896 photo of Brighton High School. The photo is labeled, "Boiler and Lunch room," and as one commenter suggested, it was likely a lunch room for school workers rather than students. This room was probably in the basement of the school

BPD captain who had been on paid leave for more than two years cleared of most charges
Rats running amok through Boston; residents, councilors demand action
No matter where on earth they roam, people will know Boston is their home
Court to Quincy: Boston can rebuild its bridge to Long Island
All diseases skillfully treated
Doing it old school on another steaming hot day in Boston