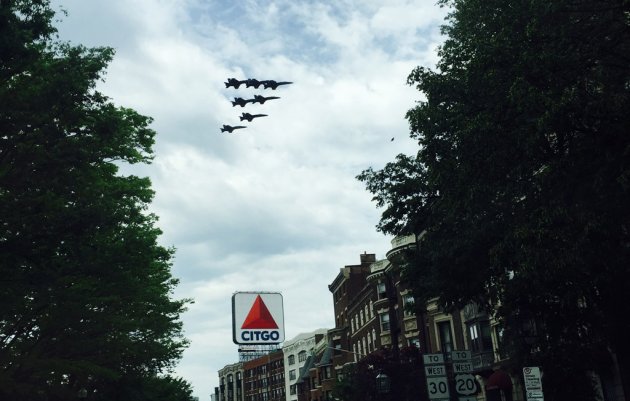 Just flew over as I was outside bringing in my trash barrels. Stunning, like they came out of nowhere. Low and loud. Impressive seeing them fly over the city.

This seems like the wisest use of our tax money I could ever imagine.

Not as bad as our billion dollar semi-functional healthcare website.

Here's a few more for you.

My favorite, $100+ mill on fraudulent tax return to inmates.

So one example of government waste negates all others?

Have you considered it's possible the government could waste a money in a multitude of ways and this photo shoot is but one example of something that didn't need to be done?

One man's waste is anothers..

One man's waste is anothers... I'm not going to debate whether it is a waste or not, certainly if you consider the demonstration teams like the Blue Angel to be a waste then you'll consider them a waste whether they are flying or not. But, when it comes to flyovers in general, they are scheduled in such a way to fit into the training requirements (flight time) these pilots are subjected to, so the planes would be flying for the same amount of time whether it be a public event or over some desert in New Mexico.

If you don't consider the air show in RI this weekend a waste, then this also serves as practice for the pilots who will be performing this weekend, and using the practice run as a photo op would then be getting more value out of the run than just flying the planes to fly them.

And if you are unhappy with the way your tax dollars are spent, write your congressman.

The military is likely paying a pretty penny to a PR agency who had to do all sorts of things in order to get the shots they needed. Why do they need photos of these jets flying over Boston anyway? It's not like the photographers need to log training hours. There had to be all sorts of other people on duty, expenses paid, etc for this so it's hardly normal training mission.

I'm critical of any civilian demonstration of military might but when I hear about big bucks being spent on PR related topics my bullshit expense detector goes into overdrive.

Is there anything they photographed today that couldn't be achieved with a minor amount of Photoshop?

Yes: a real image of the jets

Yes: a real image of the jets flying across Boston.

has long since been my favorite part of the 4th of july celebration in boston.

sometimes they get some really cool planes.

too bad theres so much security theater and BS. used to go by boat every year but theyve added a lot of restrictions.

Used to go to the Pops July 4th rehearsal every year. So much security now I'd just as soon skip it.

I get it. Doesn't mean I have to deal with it.

Walked over to the Public Garden to see if they flew over - I don't think they ever came over downtown. Just barely picked them up above the tree tops screaming down the Charles. Bet some people got cool pics if they were on the Esplanade.

Security and the Pops

Man, are they flogging the Keith Lockhart thing this year or what? And is there anyone with a higher profile and less talent? He's kind of our very own musical Kardashian. I would think that your average Jihadi would be happy to leave him upright and smiling, just to increase our torment.

Problem with getting rid of

Problem with getting rid of him is no one else wants the job.

The Pops are so stale now it isn't funny. They need a breath of fresh air from someone new.

I miss back in my younger days when the Pops were hip and edgy.

Arthur Fielder was THE BEST!

And yes, fellow UHub'ers, that is a real album.

Only on this site can a

Only on this site can a picture of the Blue Angels turn into people talking about Keith Lockhart and the Kardasians within 5 comments.

The City of Boston would be far better off if we once and for all did away with these outdated and bland traditions.

I think that would be a colossal loss. They may need updating, but they are both part of what makes Boston, well, Boston.

as somebody that complained about the crappy parts of the 4th of july celebration, you seem like a dickweed even to me

How many times did they circle? I swear I saw them fly by Somerville something like 5-6 times. You could barely hear it over the engines, but folks (us included!) whooped and hollered at a few of the passes.

Video of the fly-over

I got a crazy good video from the end of Black Falcon Pier. Was quite a rush to have them fly so close overhead, very loud! Check it out: Thanks for catching this!

This must be part of the Jade Helm exercise to invade Texas. I knew Obama would start with an air raid on Kenmore Square.

For someone mocking concern with Jade Helm

you sure know an awful lot about it. The majority of people in this neck of the woods wouldn't be able to tell you what it is. Why is that?

It's interesting that 'progressives' circa 2015 think the way they think, when I was little, 'liberals' (what 'progressives' were called back then), would have been in the forefront of protesting a large scale, domestic military operation like Jade Helm, and would be the ones embracing this, and other, 'conspiracy' theories. They were the masters of 'conspiracy theories' when I was a kid. Times change.

Texas for you on line 1

They want you back.

Has been doing extremely well for decades now; name a 'progressive' state that has. NY for example is a disaster.

So I take it 'progressives' now love the government and military? Wow, just wow.

Disclaimer: I'm not necessarily anti-government, or believe Jade Helm is a 'conspiracy'. Just find 'HIPOCRICY' among 'progressives' or 'conservatives' sad and amusing. Two peas in a pod. Pot meet kettle.

Look, son, give up while you're behind

Progressive states that are doing well? You're not from Massachusetts, then? Never heard of Vermont? And for all the problems New York has, it's hardly the failed state you wish it were.

As somebody who grew up in a liberal household, no, liberals didn't/don't hate government. Unlike the pinheads in Texas who think the American government wants to conquer an American state and throw all the "patriots" into FEMA-guarded Walmarts, most liberals see a legitimate role for government. You might want to look up "Great Society" and the role the government played in enforcing decisions such as Brown v. Board of Education and laws such as the Civil Rights Act. You might want to look up things such as clean-air and clean-water acts (oops, or maybe not, since the EPA was started by a Republican).

There's a difference between military action that's aimed directly at American citizens (Kent State) and military training for foreign wars. What's that? Alex Jones is on the radio now? Sure, sure, you go listen to him.

I AM FROM MASSACHUSETTS! BOSTON! THE CITY

not suburbs. Was born, and also lived, in NYC. NICE TRY.

And, of course, it's true: 'Progressive' states are nothing to brag about, MA included. ALL the population growth, and internal, donestic population migration has been from so-called blue, 'progressive' states to so-called red states, especially places like Texas...even people from California (another state I lived in) have been migrating to Texas for employment, lower cost of living, etc. DEAL WITH IT, don't just mock the messenger. MA has been losing congressional representation for decades, everytime districts are redrawn to reflect population trends.

And I'll be visiting family in Houston in the fall; you know, Houston, 4rh largest city in the U.S., only major American city with a population over 1 million to ever have an openly gay (lesbian) mayor. Texas ironically also has a mega 'progressive' capital city, Austin.

Some peoe on here need to get out of the northeast more often. And finally: I'm not Republican, certainly not a 'neo-con'

Move to Texas, then

Or, maybe, Kansas or Wisconsin, where people like you have made sure that their bizarre faith-based economic dreams are enshrined in ways that have destroyed their economies (bleeding jobs and money).

I am an Atheist. Nice try. And DID NOT say I was a Republican (NOT, nor Democrat). My point, places like Texas, as much as you loath it for ideological reasons, are doing very well economically, and have a healthy population growth and demographics. And it doesn't cost your first born child to live there, even in huge cities like Dallas or Houston. 'Progressive' Nirvanas like, for example, S.F. or NYC, are beyond the reach of most people and are HIGHLY socioeconomically stratified. Boston (area), not as bad, is no cake walk. This is true pretty much of all 'progressive' places. I find this to be seriously at odds with all the 'progressive' big talk I've heard my entire life living in 'progressive' dominated places.

Just CONSTRUCTIVE criticism, nothing to get anyone's panties in a bunch.

Why? Control?What about humans who fon't fall into any of your categories?

with progressives or conservatives....... cuz it's spelled hypocrisy, you dodo. ;-)

Learn to tolerate dissent , even if you don't like it. Isn't that what being a true believer 'progressive' is all about, being tolerant and celebrating diversity?

The first time as tragedy,

The second time as farce.

From the Yippies to the Tea Party. From hell no we won't go to get your gummint hands off my medicare scooter.

The weirdest thing of late has been seeing the good old boys turn against the troops in Texas.

Keep telling yourself the stories that legitimize it. Jade Helm. Oooh! The UN is next!

The bottom of it is that the nutters hate America, wish the Civil War had succeeded in making this a continent of fractured nations, and they are finally realizing the troops are on America's side, not theirs.

Here at the DTB.

They're really in town to

chase down those fuckers on the dirt bikes.

they are amazing machines...

...but let's not lose sight of the fact that they are sober war machines built for destruction. So many have been on the receiving end of rockets and bombs delivered from planes similar to these. and so many have been innocent. Most folks here (as I include myself) can only imagine a fraction of the destructive power of these planes and only an inkling of the terror they inspire in the war theatres of the world. 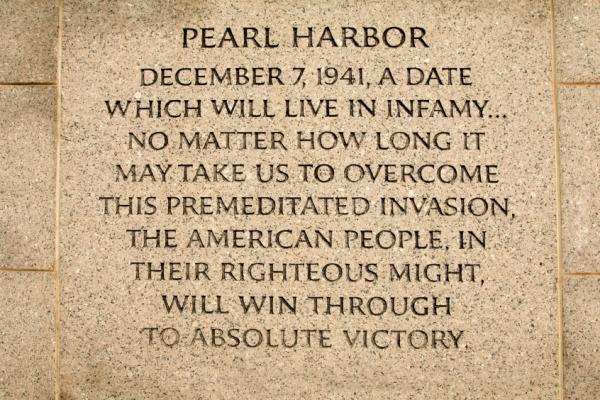 right, which kind of proves my point.

1. if you visit to pearl harbor, it is a very somber experience to pay respects to the arizona and other ships that lie on the bottom of the bay...no one says a word. Powerful. At the visitor's center, volunteers who remember the day are, god bless 'em, in their 80s and 90s...the lasting memory is fading.

2. of over 3000 killed, only 68 were civilians, some of whom may have been killed by unexploded american anti-aircraft shells...not sure we can claim that kind of "precision" in the recent wars of the late 20th and early 21st century.

terror is terror no matter what flag is on the bomb.